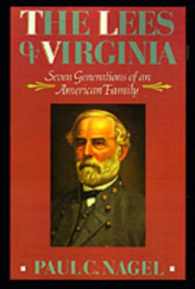 In The Lees of Virginia, Paul Nagel chronicles seven generations of Lees, from the family founder Richard to General Robert E. Lee, covering over two hundred years of American history. We meet Thomas Lee, who dreamed of America as a continental empire. His daughter was Hannah Lee Corbin, a non-conformist in lifestyle and religion, while his son, Richard Henry Lee, was a tempestuous figure who wore… black silk over a disfigured hand when he made the motion in Congress for Independence. Another of Thomas' sons, Arthur Lee, created a political storm by his accusations against Benjamin Franklin. Arthur's cousin was Light-Horse Harry Lee, a controversial cavalry officer in the Revolutionary War, whose wild real estate speculation led to imprisonment for debt and finally self-exile in the Caribbean. One of Harry's sons, Henry Lee, further disgraced the family by seducing his sister-in-law and frittering away Stratford, the Lees' ancestral home. Another son, however, became the family's redeeming figure--Robert E. Lee, a brilliant tactician who is still revered for his lofty character and military success. In these and numerous other portraits, Nagel discloses how, from 1640 to 1870, a family spirit united the Lees, making them a force in Virginian and American affairs. Paul Nagel is a leading chronicler of families prominent in our history. His Descent from Glory, a masterful narrative account of four generations of Adamses, was hailed by The New Yorker as &quoteintelligent, tactful, and spiritually generous,&quote and Pulitzer Prize-winning historian W.A. Swanberg, in the Chicago Sun-Times, called it &quotea magnificent embarrassment of biographical riches.&quote Now, in The Lees of Virginia, Nagel brings his skills to bear on another major American family, taking readers inside the great estates of the Old Dominion and the turbulent lives of the Lee men and women.