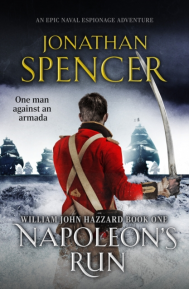 One man against an armadaLondon, 1798. Late one night, a junior naval officer at the Admiralty intercepts a coded despatch, marked with blood: Napoleon Bonaparte is about to launch the largest invasion fleet in history. Target: unknown.England is vulnerable, bereft of allies, and the Sea Lords fear a direct assault on Britain. Admiralty Intelligence sounds the alarm and prepares to unleash Nelson … and the Mediterranean squadron.But before they can, they need vital information. They need a special officer to infiltrate by land or by sea to uncover the destination of Napoleon's armada - a man who never stops.Marine Lt William John Hazzard.But will he agree to help them?Betrayed by the Admiralty at the African Cape three years earlier, Hazzard has vowed never to trust them again. Bitter memories poisoned his return home, and his devoted fiance Sarah, unable to bear his pain any longer, disappears in Naples - never to be seen again.But the Admiralty knows just how to get him back.They know where Sarah is, and her life is in dangerFrom pitched sea-battles to back-street duels in a covert war, this is the epic adventure of the new hero of Napoleonic fiction: Hazzard. Perfect for fans of Seth Hunter, Bernard Cornwell and CS Forester.Never give up the boat.Praise for Napoleon's Run'Hornblower meets Mission: Impossible. A thrilling, page-turning debut packed with rousing, rip-roaring action' J. D. Davies, author of the Matthew Quinton Journals'Outstanding... Packed to the gunwales with action, this fast-paced story introduces us to William Hazzard, a Marine Lieutenant who takes on not just Napoleon, but also the espionage and machinations of the new French Republic during the reign of terror, Neapolitan high society, and even the British Admiralty itself. Leading a crew of wonderfully-drawn characters, Hazzard is not only a convincing action hero, but also one who offers a timeless insight into loyalty, trust and honesty. A thumping read' Chris Lloyd, author of The Unwanted Dead'A great read! Well-tempered and well-researched, with well-drawn characters who will, I am sure, be with us for a while' Rob Low, author of The Lion Wakes'Loads of action and plenty of plot twists, meticulously researched with a fine period feel' A.J. MacKenzie, author of The Ballad of John MacLea

Other ebooks releases by Jonathan Spencer