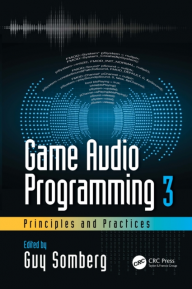 Welcome to the third volume of Game Audio Programming: Principles and Practices-the first series of its kind dedicated to the art and science of game audio programming. This volume contains 14 chapters from some of the top game audio programmers and sound designers in the industry. Topics range across game genres (ARPG, RTS, FPS, etc.), and from low-level topics such as DSP to high-level topics li… ke using influence maps for audio.The techniques in this book are targeted at game audio programmers of all abilities, from newbies who are just getting into audio programming to seasoned veterans. All of the principles and practices in this book have been used in real shipping games, so they are all very practical and immediately applicable. There are chapters about split-screen audio, dynamic music improvisation, dynamic mixing, ambiences, DSPs, and more.This book continues the tradition of collecting modern, up-to-date knowledge and wisdom about game audio programming. So, whether you've been a game audio programmer for one year or ten years, or even if you've just been assigned the task and are trying to figure out what it's all about, this book is for you!Key FeaturesCutting-edge advanced game audio programming concepts with examples from real game audio engines Includes both high-level and low-level topicsPractical code examples, math, and diagrams that you can apply directly to your game audio engine.Guy Somberg has been programming audio engines for his entire career. From humble beginnings writing a low-level audio mixer for slot machines, he quickly transitioned to writing game audio engines for all manner of games. He has written audio engines that shipped AAA games like Hellgate: London, Bioshock 2, The Sims 4, and Torchlight 3, as well as smaller titles like Minion Master, Tales from the Borderlands, and Game of Thrones. Guy has also given several talks at the Game Developer Conference, the Audio Developer Conference, and CppCon. When he's not programming or writing game audio programming books, he can be found at home reading, playing video games, and playing the flute.