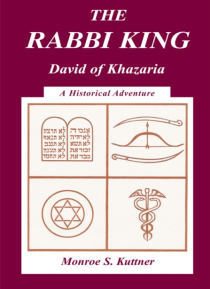 &quoteThe Rabbi King&quote is a history-based adventure novel that tells the story of David, the fictional last Khagan of a remnant of the historical Jewish Kingdom of Khazaria that may have existed into the early thirteenth century. It was located in the area of the Caucasus that now comprises Dagestan and Chechnya, on the western shore of the Caspian Sea. In the middle of the eighth century th… e Khazar Khagan (king) and his nobles adopted Judaism as their religion. In the novel, David, son of the Khagan, is sent from his homeland in the Caucasus to Spain at age seven. There, he studies in the same household with another boy who is later called Maimonides, earning the right to be called Rabbi, a scholar of the laws, scriptures and customs of Judaism.When the time comes to return home, seventeen-year-old David leaves civilization to rule an untamed country. His Khazaria is sparsely populated by pagan nomads and by the descendants of many Jewish immigrants who fled persecution in Persia and Byzantium and intermarried with Khazar converts. To survive, they must emulate the lifestyle of the nomads.When Davids father dies, he becomes Khagan and is sworn to keep his homeland safe and under a Jewish sovereign. He faces many difficulties, not the least of which is trying to balance his wish to keep the Jewish laws and customs he learned in Spain against the need to survive in a wild country under attack by barbarian tribes.In an effort to reverse a betrayal of his people, David of Khazaria undertakes a long journey, both physically and spiritually, to save his kingdom. He meets many important historical personages and plays a role in some of the events that shaped history in the years between 1150 and 1170 C.E.in the Caucasus, Persia, Byzantium and Egypt.A Review From The Jerusalem Post Internet Edition: Who is a Khazar? By Gabriel A. Sivan February, 20 2002 (February 20)The Rabbi King: David of Khazaria. a Historical Adventure by Monroe S. Kuttner. Xlibris/Random House. 505 pages.A once-upon-a-time true fable about a Jewish kingdom in south-eastern Russia continues to capture the imagination.Though a work of fiction, this is one of several books that testify to renewed interest in the Khazars, a formerly nomadic people of Turkish stock whose ruling class embraced Judaism in or around 740 CE and established an empire stretching from the Crimea to the Aral Sea.By tradition, it was after a debate between representatives of Judaism, Christianity and Islamin which the Jewish arguments proved most convincingthat King Bulan made Khazaria Jewish. The faith that he adopted contained an admixture of paganism, however, and normative rabbinic Judaism was only introduced by his successors.Khazar merchants traded through_out the Near East; Khazar troops helped the Magyars conquer Hungary and joined the Byzantines in a war against Persia.Vague accounts of this remote but powerful empire heartened Jewish communities in Western Europe and inspired Judah Halevis famous exposition of Judaism, Sefer ha-Kuzari (see box). Tragically, from 965, the Khazar state declined and eventually collapsed under savage Russian and other attacks.&quoteHowever, it is documented that Khazars, and a land called Khazaria, existed well into the early 13th century, probably in the area of Russian Dagestan and Chechnya,&quote writes Monroe Kuttner, author of The Rabbi King, who obviously did a great deal of research.True enough, Khazars appear to have survived as an ethnic group until the Mongol invasion in 1237, and the last remnants were no doubt absorbed by Jewish, Karaite and Christian populations.Kuttner evidently believes that there were Khazars among his ancestors in Hungary and Russia. On that basis, he invents a khagan or king named David, Khazarias last rulerduring the years 1150-1170whose empire is limited to what is now Dagestan.Ordained as a rabbi in Cordova, where young Moshe ben Maimon was a fe