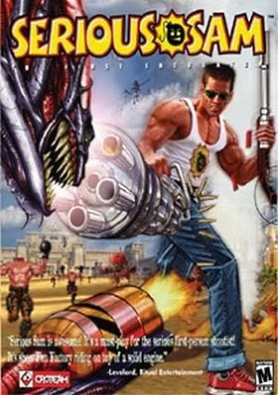 In the near future, during the first interstellar travels, humans encounter great evil roaming the galaxy for last few eons. The evil being is an incarnation of the last of the ancient immortals named Tah-Um (or in English - Notorious Mental). Mental has set forth to wipe the earthlings out for sheer fun, just like it did with all the other civilizations in the galactic history. This time, hum… ans have a secret weapon left to them by an extinct civilization from Sirius - Timelock. Timelock will enable special forces veteran Sam 'Serious' Stone to return to the time of ancient Egypt and assassin Mental while it is offhand. Serious Sam is a high-adrenaline arcade-action shooter heavily focused on frantic arcade-style single player action. In a world where cyberpunk meets fantasy-fiction and advanced technology is mixed with black magic and psycho-powers, Sam travels through the beautiful world of ancient Egypt and several diverse planets, confronting countless Mental's minions on his way to the Mental's base. Features: Various Environments and Secrets - Unleash mayhem in ancient Egypt. Discover over 80 secrets hidden in the fray. Unique Enemies and Bosses - Fight with over15 nightmarish warriors in Mental's army, including Beheaded Kamikaze, Syrian Werebull and Kleer Skeleton. Special Weapons and Power-Ups - Wreak havoc with a huge arsenal of weapons including Double Shotgun, Rocket Launcher, Minigun and Cannon. Powerful 3D Technology running on majority of PC systems - Allowing play on most current PC video cards and processors, 'Serious Engine' features state of the art technology including multiple direction gravity, portals and mirrors, truly dynamic volumetric fog and haze, hyper-texturing and hyper-mapping for life-like richly detailed environments, photo-realistic lens flares with real-time lens reflections, advanced particle system, procedural textures (water, fire, smoke, plasma, electricity),photo-realistic reflections, specularity and bumps, up to 4 split screen support, easy-to-use real-time development tools, ... Fighting With Loads of Enemies at The Same Time (high-adrenaline arcade-feel action) - Serious Sam is filled with loads of enemies. This is possible with the latest engine technology. It is possible to have 50+ enemies in one scene, with everyone firing, running, jumping and screaming at the same time. This feature is not extensively used in any 3D action so far, because technology didn't allow it. But, with our Serious engine this is now possible. It is used primarily in open spaces, where it is possible to put hundreds of enemies in one playground. Both Huge Outdoor and Indoor Environments - All levels in the game are vast. The engine was designed to support both indoor and outdoor areas in a creative mixture, with each level spreading on up to 1000 cubic miles. There is a smooth transition between indoor and outdoor environments. The indoor levels are done with rendering techniques more powerful than other present engines. Outdoor sections are new and never before seen in any other FPS. They are big, long and provide hours of just walking and days of playing. Bright and Beautiful Surroundings - In Serious Sam there are very bright and easy-to-see levels. This is possible because of newest 3d technology which allows complex architecture, multi-texturing, sunlight, ... You don't have to adjust brightness/contrast to properly see the scenes, and the scenery/architecture provides visual pleasure while playing the game. Multiple Gravity - Our newest technology allows having multiple gravity in one room. This means you can fight with enemies who are jumping from one wall to the other, or ambushing you from the ceiling. At the same time, you can jump to ceiling or throw a grenade up. This grenade will bounce UP to the ceiling (normal grenade would bounce down to the floor). This situation is only one example of the numerous that can be done with this feature. Multiple gravity has got great, unexplored potential for single-play and for the multi-play as well. This feature is never before seen in any other game. Cooperative and Deathmatch Online Play for up to 16 players - Play Cooperative, Fragmatch/Deathmatch or Scorematch in up to 16-player matches. Both LAN and Internet Multiplay with Dedicated Server Support - Play Multiplayer on both LAN and over the Internet. Dedicated server support uncluded! 2-4 Split Screen Support - Split screen option which allows for up to 4 players playing on a single computer. If you have Dual-head technology, it is possible for two players to play each on his/hers own monitor. Serious Tools Included - Serious Sam also includes tools used to create the game: Serious Editor and Serious Modeler, so gamers can create their own levels. System Requirements: OS: Windows 95/98SE/ME NT 4.0 (with Service Pack 5)/2000/XP/Vista/Seven CPU: AMD Athlon 650MHz or Pentium III 650MHz range processor RAM: 128MB Video: nVidia GeForce256 or TNT2 ultra, PowerVR Kyro, S3 Savage2000, 3Dfx Voodoo3, ATI Rage128 pro Sound: Creative Labs SoundBlaster Live HDD: 700MB free hard disk space

Other game releases by Devolver Digital