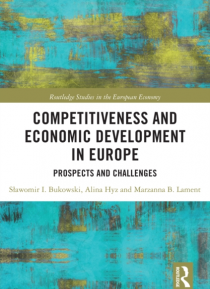 The success of an economy to adapt quickly, flexibly, and effectively to the demands of the changing international economic environment can only be investigated using the achievements of other national economies or regions as a benchmark. This book analyzes the fundamental factors of competitiveness, which will, in turn, facilitate economic development and growth, in the new post-crisis environmen… t. In the economic, social, legal, and technological environment that has emerged in recent years, as well as in the period after the recent financial crisis, it is critical to define, assess, and implement new pathways to competitiveness and economic development. The book covers all aspects of competitiveness and economic growth, from financial intermediaries to tourism and the digital economy, and from regulation and corporate governance to exchange rate dynamics and monetary policy issues. It uses empirical findings from a variety of different countries with divergent economic structures and policies. It examines the new system of production, and the technological, commercial, financial and institutional environment, with the aim of recommending a proportional division of benefits and costs of economic growth. It offers a fresh, holistic, and flexible concept to underscore the new relationship between competitiveness and economic growth. Such an approach is needed, whereby competitiveness is no longer a zero-sum game between countries, but is achievable for all countries. The book recommends future directions and offers policy solutions, and as such, will appeal to students, researchers, and policymakers, as well as those interested in the role of competitiveness in the operation of markets, productivity, and economic development, and how it might foster innovation and growth.