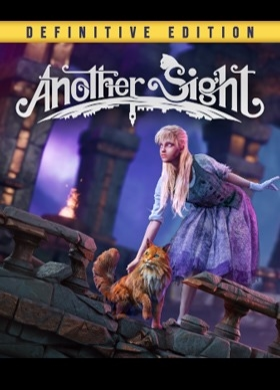 NOTICE: Activation key must be used on a valid Steam account. Requires an internet connection. Definitive Edition Welcome to the New Edition of Another Sight! Enjoy the refreshed adventure of Kit and Hodge in the most definitive edition of the game and now for the first time on MAC OS. We have lifted the hood of the game to improve the adventure even more, including: Improved gameplay:… Kit's pacing has been re-tuned to improve the game rhythm, rendering her adventure more fluid than ever. Improved UI: It is possible now to see all the characters and location description directly in-game, without exiting to main menu. Improved controls: Kit and Hodge are easier to control now, controls are more accurate and input lag has diminished. Improved visuals: New highlight system has been developed, allowing the player to easily identify interacting objects without affecting the visuals. Kit's Other Sight: Light bubbles were completely re-tuned, giving a new and more appealing feel to Kit's view with new colors and effects. Improved Camera: Most of the game cameras are new and improved, in order to provide a more immersive experience and help the underline the action. Improved performance: Optimizations were made in order to make the game more fluid and loading faster on every platform. New languages supported: Korean and Russian have been added to the supported languages. Bugfixes and much more: Several small bugfixes and improvements in menu, key mappings, audio, level design, cutscenes, and more. About the game ANOTHER SIGHT is a surreal fantasy adventure with steampunk elements set in London in 1899, towards the end of the Victorian era. With an emphasis on culture and character, ANOTHER SIGHT focuses on the emotional development of the relationship between its two protagonists, Kit, a refreshingly intrepid teenager, and Hodge – a mysterious red-furred cat. They meet in the darkness of a London Underground construction site, after Kit loses her sight when the tunnel she had been exploring collapses. They team up for an adventure into the unexpected, with Hodge proving himself to be an indispensable companion, upon whom Kit will come to rely. Kit and Hodge explore a surreal fantasy world, both together and separately, each using their own unique talents to make their way through compelling environments, and to solve intriguing puzzles. Beneath London, in a world inspired by Neil Gaiman’s urban fantasy, Neverwhere, Kit and Hodge encounter a hidden society made up of the world’s greatest inventors and finest artistic minds, including Claude Monet, Nikola Tesla, Thomas Edison and other historical cultural icons. Key features AN EMOTIVE ADVENTURE – A story about a girl and her cat companion on a journey beyond sight and the real world. A tale of affection and intrigue is woven throughout the adventure, touching on trust and companionship, and the consequences of losing what we take for granted. The innovative gameplay and emotional story are galvanized through a soundscape brought to life by a symphonic orchestra, emphasizing the most memorable moments on Kit and Hodge's emotional and physical journey. MASTERS FROM THE PAST - Throughout their journey, Kit and Hodge will meet celebrated virtuosos such as Claude Monet and other historical cultural figures, and learn more about the world and the dangers it presents. These encounters have a visual impact on the world, as Kit's perception alters according to the aesthetics of each famous character's creative movement. NARRATIVE-DRIVEN GAMEPLAY – Use the unique abilities of each character to help Kit and Hodge traverse the world and overcome environmental challenges. Kit and Hodge can split up to investigate different areas of the locale that the other may not be able to reach, with both Kit and Hodge perceiving the world in very different ways, opening up different possibilities for overcoming the obstacles they are faced with on their adventure. system requirements Windows - Minimum OS: Requires a 64-bit processor and operating system Processor: Quad-core Intel or AMD processor, 2.0 GHz or faster Memory: 4 GB RAM Graphics: Nvidia GeForce GTX 470 / AMD Radeon HD 6870 or higher DirectX: Version 11 Storage: 10 GB available space Windows - Recommended OS: Requires a 64-bit processor and operating system Processor: Intel Core i5 Memory: 8 GB RAM Graphics: Nvidia GeForce GTX 660 / Radeon HD 7770 DirectX: Version 11 Storage: 10 GB available space Mac - Minimum OS: Requires a 64-bit processor and operating system OS: MacOS 10.12 Sierra or later Processor: 2.6 Ghz or more Memory: 8 GB RAM Graphics: Intel HD 5000 Storage: 10 GB available space Mac - Recommended OS: Requires a 64-bit processor and operating system (C) 2018 Lunar Great Wall Studios S.r.l. All Rights Reserved. All other trademarks and brand names are properties of their licensor. Inspired by historical characters, this is entirely a work of fiction. All the events and incidents portrayed within are the product of the developers' imaginations. Any resemblance to actual events or localities is entirely coincidental.

Other game releases by FISH EAGLE