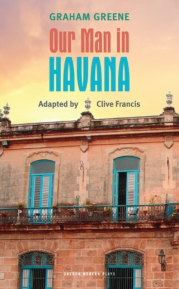 Jim Wormold, an under-employed vacuum cleaner salesman living in 1950s Cuba, is struggling to pay for his teenage daughter's increasingly extravagant lifestyle. So when the British Secret Service asks him to become their 'man in Havana' he can't afford to say no. There's just one problem...he doesn't know anything! To avoid suspicion, he begins to recruit nonexistent sub-agents, concocting a serie… s of intricate fictions. But Wormold soon discovers that his stories are closer to the truth than he could have ever imagined... In Clive Francis' adaptation, Graham Greene's classic satirical novel becomes a wonderfully funny and fast-moving romp.

Other ebooks releases by Graham Greene