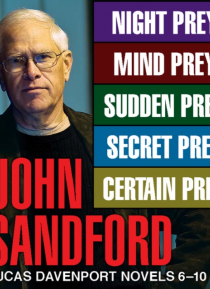 Novels six through ten in #1 New York Times bestsellingand Pulitzer Prize-winning author John Sandford's Prey series, featuring Minneapolis homicide investigatorLucas Davenport.NIGHT PREYA savage psychopath is playing cat and mouse with Lucas Davenport. But both killer and detective find themselves at odds with a female investigator who has intensely personal reasons for catching the killer hersel… fand fast.MIND PREYLucas Davenport has met his matcha nemesis more intelligent, and more depraved, than any he has tracked before. A pure, wanton killer who knows more about mind games than Lucas himselfand with a female psychiatrist already in his trap, he's one step ahead.SUDDEN PREYThe crime spree should have ended when Lucas Davenport killed the female bank robber during the shoot-out. But it's just beginning, because the woman's husband isn't about to let Lucasor anyone he lovesescape retribution.SECRET PREYWhen a wealthy banker is shot dead during a hunting trip, Lucas Davenport's routine murder investigation turns into a cat-and-mouse game with a killer who won't hesitate to take the fight to Lucas himself. And those he lovesCERTAIN PREYA wealthy socialite has been murdered. Now the killer must tie up a few loose ends. One is the witness. The other is Lucas Davenportand of all the criminals Davenport has hunted, none has been as efficient or as ferociously intelligent as the woman who's hunting him.

Other ebooks releases by John Sandford