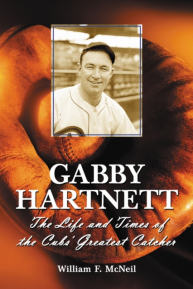 Gabby Harnett is believed by many to be the greatest catcher of all time. This work chronicles Hartnett's life from his early years in Millville, Massachusetts, through his twenty-year career with the Chicago Cubs as player and manager, his time in various capacities in the minor leagues and with the New York Giants and Kansas City Athletics, to his post-major league career as a businessman in Chi… cago. His childhood, early baseball experiences with the local team and with a nearby prep school, and his first professional baseball season with the Worcester Boosters of the Eastern League are covered in detail. Hartnett's major league career as the catcher for the Cubs is well-documented, including his near career-ending arm injury in 1929, the 1932 World Series that featured Babe Ruth's legendary &quotecalled shot,&quote and Hartnett's famous &quotehomer in the gloamin&quote against the Pittsburgh Pirates that propelled Chicago to the 1938 National League pennant. The author also compares Hartnett's statistics to those of his famous contemporaries, Mickey Cochrane and Bill Dickey, on a year-by-year basis.