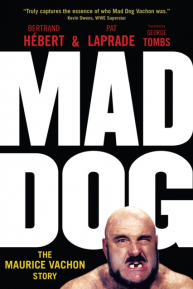 'The true story of one of pro wrestling s most charismatic, feared, and beloved icons Who was Maurice the man, and who was Mad Dog the character? Maurice Mad Dog Vachon was a gold medalist, a pro-wrestling legend, and a pop culture icon but he was also a son, husband, and father. Mad Dog explores Vachon s career and personal struggles with painstakingly detailed historical research and through bot… h Maurice s own recollections and those of the people who knew him best. As a young man, Maurice could have chosen a dark criminal path, but then wrestling and family changed him. Chronicling his slow but steady rise to prominence across America and internationally in some of pro wrestling s most important territories, this in-depth biography shows how Vachon s life came to be defined by the words of Mark Twain: It s not the size of the dog in the fight, it s the size of the fight in the dog. Fiercely proud, motivated, and supremely talented, Vachon s stor

Other ebooks releases by Bertrand Hebert