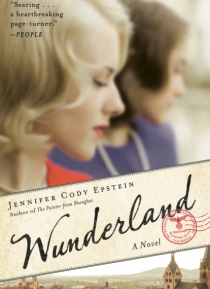 USA TODAYBESTSELLER *;';Searing . . . a heartbreaking page-turner.'People';Both heartbreaking and hopeful, this story of a daughter searching for the truth about her mother's secret past, tangled up in old secrets and terrible lies, kept me up late turning pages.'Martha Hall Kelly, bestselling author ofLilac GirlsNAMED ONE OF THE BEST BOOKS OF THE YEAR BY REAL SIMPLE Once inseparable, Berlin teena… gers Ilse Fischer and Renate Bauer find their friendship ripped apart by their nation's abrupt swing into fascism. Ilse, a so-called Aryan, throws her lot in with the Nazi Party, while Renate sees her once-secure world dismantled by Adolf Hitler's race laws and then shattered by a shocking betrayal. Decades later, that same betrayal will upend the life of Ilse's daughter, Ava, as she discovers long-buried truths about her mother's past. A harrowing page-turner, Wunderland traces the lives of three women across two generationsand the devastating repercussions of choices made in the dark days of wartime Germany.Praise for Wunderland';Engrossing . . . Epstein reveals the devastating choices these women make.'Real Simple';Wunderlandis both an engrossing family drama and a foray into a dark period of history . . . a wholly original angle to the WWII novel. You'll read it in one shivered sitting.'Refinery29';A vividly written and stark chronicle of Nazism and its legacies.'Kirkus Reviews(starred review)';A wealth of history turnsWunderlandinto a novel that's both beautiful and devastating. . . . Epstein taps into the 1930s prewar era, laying out an unsparing narrative that details tragic events and horrifying legacies . . . opening a new door that may lead to redemption and joy for future generations.'BookPage(starred review)';[A] heartbreaking historical tour de force . . . Man's inhumanity to manand the redemptive power of forgivenessis on stark and effective display in Epstein's gripping novel, a devastating tale bound for bestseller lists.'Publishers Weekly(starred review)