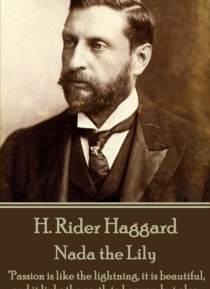 Sir Henry Rider Haggard, KBE was born on June 22nd, 1856 at Bradenham in Norfolk, England. After his education he was pushed towards an Army career but failed the entrance exam. Next Haggard was positioned to work for the British Foreign Office but he seems not to have sat that exam. Using family connections, he was sent to Southern Africa by his father in search of a further opportunity of a c… areer. Haggard spent six years there before a return to England and marriage. He had begun to write and publish some non-fiction in Africa but it was only after studying Law in the hope it might prove to be the proper career his father wanted for him that Haggard began to write fiction, using his African experiences as the basis. His first fiction was published in 1885 and the following year King Solomon's Mines was published. It was a phenomenal success. His career was set. Haggard wrote well and wrote often. He managed to sympathise with the local populations even though they were exploited and manipulated by Europeans intent on amassing fortunes in money, people and resources. His writing career covered the great sprint to Empire of several European powers and both reflects and criticizes these events through his well-loved characters including Allan Quatermain and Ayesha. In his later years Haggard pursued much in the way social reform as well as standing for Parliament and writing a great many letters to The Times. Henry Rider Haggard died on May 14th, 1925 at the age of 68. His ashes were buried at Ditchingham Church.