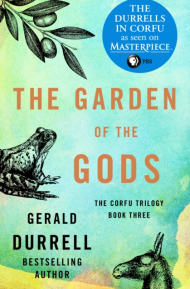 Part of the trilogy of memoirs that inspired the television show The Durrells in Corfu: A naturalist's adventures with animalsand humanson a Greek island. When his family moved to a Greek island, young naturalist Gerald Durrell was able to indulge his passion for wildlife of all sorts as he discovered the new world around himand the creatures and people who inhabited it. Indeed, Durrell's years g… rowing up on Corfu would inspire the rest of his life. In addition to his tales of wild animals, Durrell recounts stories about his even wilder familyincluding his widowed mother, Louisa, and elder siblings Lawrence, Leslie, and Margowith undeniable wit and humor. The final chapter in Durrell's reflections on his family's time in Greece before the start of World War II, The Garden of the Gods is a fascinating look at the childhood of a naturalist who was ahead of his time. This ebook features an illustrated biography of Gerald Durrell including rare photos from the author's estate.

Other ebooks releases by Gerald Durrell