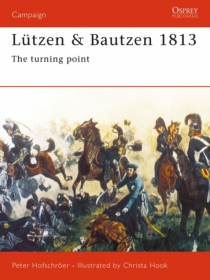 Following the disastrous Russian campaign of 1812, Napoleon found himself facing a new coalition of his old enemies. With incredible speed he raised an army of 200,000 men and marched to join the remnants of the old Grande Armee in Germany. However, he no longer faced the brittle enemies of 1805 and 1806 and at L tzen on 2 May the inexperience of his new army began to show. Faulty reconnaissance b… y raw cavalry allowed Ney's Corps to be surprised by Wittgenstein's Russians. This book describes the last realistic chance Napoleon had to regain his empire by defeating the allies in Germany before Austria stirred and the tide turned even more against him.