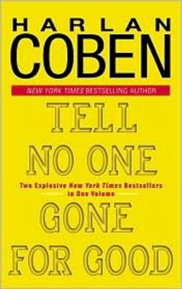 From New York Times bestselling author Harlan Coben comes an unforgettable duet of classic novelstwo top-notch thrillers filled with the authors signature storytelling genius.TELL NO ONEFor Dr. David Beck, the loss was shattering. And every day for the past eight years, he has relived the horror of what happened. The gleaming lake. The pale moonlight. The piercing screams. The night his wife was … taken. The last night he saw her alive. Everyone tells him its time to move on, to forget the past once and for all. But for David Beck, there can be no closure. A message has appeared on his computer, a phrase only he and his dead wife know. Suddenly Beck is taunted with the impossiblethat somewhere, somehow, his wife is aliveand hes been warned to tell no one.A COMPELLING AND ORIGINAL SUSPENSE THRILLER. Los Angeles Times GONE FOR GOOD As a boy, Will Klein had a hero: his older brother, Ken. Then, on a warm suburban night in the Kleins affluent New Jersey neighborhood, a young womana girl Will had once lovedwas found brutally murdered in her familys basement. The prime suspect: Ken Klein. With the evidence against him overwhelming, Ken simply vanished. And when his shattered family never heard from Ken again, they were sure he was gone for good. Now eleven years have passed. Will has found proof that Ken is alive. And this is just the first in a series of stunning revelations as Will is forced to confront startling truths about his brother, and even himself.RIVETINGHAS MORE TWISTS AND TURNS THAN AN AMUSEMENT PARK RIDE. USA Today

Other ebooks releases by Harlan Coben