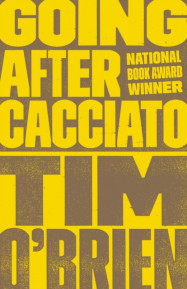 A CLASSIC FROM THE NEW YORK TIMES BESTSELLING AUTHOR OF THE THINGS THEY CARRIED&quoteTo call Going After Cacciato a novel about war is like calling Moby-Dick a novel about whales.&quoteSo wrote The New York Times of Tim O'Brien's now classic novel of Vietnam. Winner of the 1979 National Book Award, Going After Cacciato captures the peculiar mixture of horror and hallucination that marked this st… rangest of wars.In a blend of reality and fantasy, this novel tells the story of a young soldier who one day lays down his rifle and sets off on a quixotic journey from the jungles of Indochina to the streets of Paris. In its memorable evocation of men both fleeing from and meeting the demands of battle, Going After Cacciato stands as much more than just a great war novel. Ultimately it's about the forces of fear and heroism that do battle in the hearts of us all.Now with Extra Libris material, including a reader's guide and bonus content

Other ebooks releases by Tim O'Brien