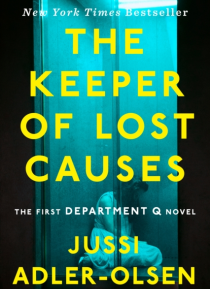 Get to know the detective in charge of Copenhagen's coldest cases in the first electrifying Department Q mystery from New York Times bestselling authorJussi Adler-Olsen.Carl Mrck used to be one of Denmark's best homicide detectives. Then a hail of bullets destroyed the lives of two fellow cops, and Carlwho didn't draw his weaponblames himself. So a promotion is the last thing he expects. But Depar… tment Q is a department of one, and Carl's got only a stack of cold cases for company. His colleagues snicker, but Carl may have the last laugh, because one file keeps nagging at him: a liberal politician vanished five years earlier and is presumed dead. But she isn't dead...yet. Darkly humorous, propulsive, and atmospheric, The Keeper of Lost Causes introduces American readers to the mega-bestselling series fast becoming an international sensation.

Other ebooks releases by Jussi Adler-Olsen