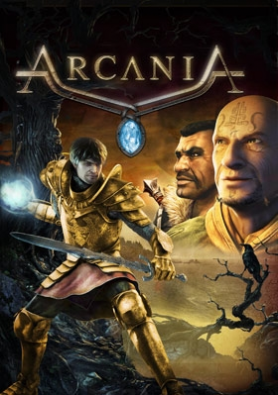 ABOUT THE GAME ArcaniA Gold Edition includes Gothic 4 -ArcaniA and the Add-On : ArcaniA-Fall of Setarrif. War covers the southern islands until it fi nally reaches the idyllic isle of Feshyr. You take on the role as the new nameless hero after your village has been pillaged and destroyed by paladins of the king. Seeking revenge, you soon realize that this cowardly attack did not just happen … on a reckless mercenary`s whim. A mysterious demon roams Argaan: Terrifying the east he seems to be directing all his devastating powers towards the coastal city of Setarrif, his motives and goals indistinguishable. After king Rhobar III was freed from the demons control, the struggle apparently is not over. The king already dispatched his armies to conquer Setarrif, but so far no word from his troops, or the frantic population for that matter, has gotten through. To top it all off, a volcano erupts in the seaside mountains and blocks all main access routes to the troubled region. Following that the unnamed Hero rallies his strongest allies and the former associates of King Rhobar, Diego, Milten, Gorn and Lester, to set out to the east to unravel the mysteries that surround Setarrif. KEY FEATURES The atmosphere: Lively, mediaeval, realistic & dense world full of details, NPCs and monsters. Cutting edge graphics, stunning weather system and day & night cycles Cinematic experience: 15 minutes of full motion video throughout the whole game and all important cliff-hangers. Every important accomplishment is rewarded Storyline: a deep, strong story embedded in the successful Gothic universe franchise accompanied by highly diversifi ed side quests. And most can be solved in different ways New locations, including new cities, coastal regions, jungles and huge volcanic mountain ranges. Loads of new items & weapons to further complement and expand your abilities. Meet all new exciting characters on your way through the newly approachable regions and dungeons in the east of Argaan. SYSTEM REQUIREMENTS OS: Windows XP / Vista / 7 CPU: Intel Core 2 Duo @ 2.8 GHz / AMD Athlon II x2 @ 2.8 GHz RAM: 2 GB GPU: GeForce 8800 GTX, GeForce 8800 GT, GeForce 9600 DirectX: 9.0c HDD: 10 GB