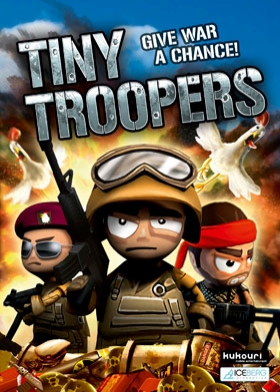 ABOUT THE GAME Lead a team of tiny soldiers on a modern battle-field, fighting in some nameless but familiar war. Tiny Troopers puts you in command of a team of small soldiers. Guide them through 30 deadly missions with varied objectives: destroy enemy armoured formations, save hostages and eliminate enemy generals, to name but just a few. Your troopers will face enemy infantry, snipers, ‘… technicals’ and even tanks. The casualty rate is going to be high but there’s an endless supply of fresh recruits to step up and fill the ranks. Those lucky troopers who survive from mission to mission will be promoted, and each new stripe they gain makes them tougher. To increase your troopers’ chances of survival, use Command Points to give them better equipment, reinforce their team with a specialist like machine gunner, medic or delta force and call in support drops during missions. War might be hell but this is the funniest way to fight in one! KEY FEATURES The safe way to fight in a war: you won't end up in a body bag. Lead your troopers in 30 deadly missions with varied objectives. Face enemies from infantry to snipers and tanks. Reinforce your squad with specialists like machine gunner, medic and delta force. Keep your troopers alive: they get better after each new rank they gain. War is hell but it can also be fun! SYSTEM REQUIREMENTS OS: Windows® XP SP3/ Windows® Vista SP2/ Windows® 7 CPU: Intel Core 2 Duo 1.8 GHz or AMD Athlon X2 64 2.0 GHz RAM: 2GB RAM HD Space: 500 MB Free Video: 256 MB ATI HD2600 XT or better, 256 MB nVidia 7900 GS or better, or Core i3 or better integrated graphics DirectX®: 9.0c Sound: DirectX 9.0c-compatible sound card Other: Mouse, Keyboard and Sound Speakers Tiny Troopers © 2012 Kukouri Mobile Entertainment. Developed by Kukouri Mobile Entertainment. Licensed exclusively to and published by Iceberg Interactive B.V. Worldwide. Iceberg Interactive design and mark are registered trademarks of Iceberg Interactive B.V. ©2009 Valve Corporation. Steam, Steamworks and the Steamworks logo are trademarks and/or registered trademarks of Valve Corporation in the U.S. and/or other countries. Microsoft®, Windows® and DirectX® are registered trademarks of Microsoft Corporation. All other brands, product names, and logos are trademarks or registered trademarks of their respective owners. All rights reserved. Made in Europe