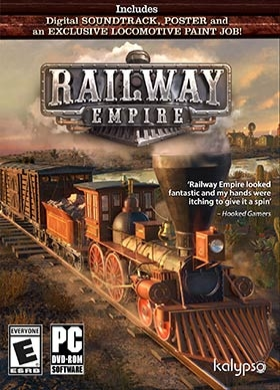 NOTE : Activation key must be used on a valid Steam account, requires internet connection. About the game United States, 1830: ‘The New World’ is in its ascendancy. Industry is booming, and the race is on to establish the most dominant and powerful rail empire in all of North America. It’s time to outthink and outmaneuver your competitors as you lead your company into the 20th centu… ry! In Railway Empire, you will create an elaborate and wide-ranging rail network, purchase over 40 different trains modelled in extraordinary detail, and buy or build railway stations, maintenance buildings, factories and tourist attractions to keep your travel network ahead of the competition. You’ll also need to hire and manage your workforce if you want to ensure an efficient train service, whilst also develop over 300 technologies ranging from mechanical improvements to the trains themselves to workplace infrastructures and advanced amenities as you progress through five eras of technological innovations. However, you can’t just build and research your way to the top – the competition never sleeps, and to keep your business on track you’ll have to survive against up to three rival tycoons. To get to the top you may have to resort to more cutthroat tactics as you attack and sabotage your opponents through raids and industrial espionage. Key features Exploit the economic opportunities of the United States in an extensive campaign, working your way step by step from coast to coast across this great continent. Lead your Railway Empire to success by establishing a comprehensive rail network and optimizing transportation of passengers and goods. Master challenges and objectives through a range of scenarios, or create your perfect railway network in construction mode without any financial pressure. Over 40 historically accurate locomotives and more than 30 different wagons can be acquired over the course of the game, and must be put to use in the best way in order to take advantage of their strengths and weaknesses. Invest in over 300 new technologies across five different eras to progress and maximize the potential of your rail network. Compete with up to three rival companies, and even sabotage their efforts with the use of bandits and spies. system requirements Windows - Minimum OS: Windows 7 SP1 or Windows 8.1 or Windows 10 (64bit versions) Processor: Intel Core i5 750 @ 2.6 GHz or AMD Phenom II X4 @ 3.2 GHz Memory: 4 GB RAM Graphics: nVidia GeForce GTX460 or AMD Radeon HD5870 (2048MB VRAM with Shader Model 5.0) Storage: 7 GB available space Sound Card: DirectX Compatible Sound Card with latest drivers Windows - Recommended OS: Windows 7 SP1 or Windows 8.1 or Windows 10(64bit versions) Processor: Intel Core i5 2400s @ 2.5 GHz or AMD FX 4100 @ 3.6 Memory: 8 GB RAM Graphics: nVidia GeForce GTX 680 or AMD Radeon HD7970 or better (2048MB VRAM or more, with Shader Model 5.0) DirectX: Version 11 Storage: 7 GB available space Sound Card: DirectX Compatible Sound Card with latest drivers Linux - Minimum OS: Linux + SteamOS Railway Empire Copyright © 2018 Kalypso Media Group GmbH. Developed by Gaming Minds Studios. Published by Kalypso Media Group GmbH. Railway Empire is a trademark of Kalypso Media Group GmbH and is used under license. All rights reserved. All other logos, copyrights and trademarks are property of their respective owner.