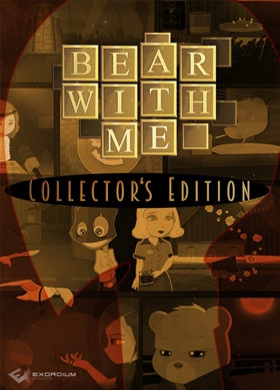 NOTICE: Activation key must be used on a valid Steam account. Requires internet connection. Collector's Edition The Bear With Me - Collector's Edition includes all three episodes of the game, telling the entire story of Amber and Ted. In addition to the three episodes, the Collector's Edition comes with: The official Bear With Me soundtrack with all your favorite tunes. A digita… l art book with loads of concepts and visuals you haven't seen before. The full puzzle and script design documents so you can look into every detail of the game. About the game Bear With Me is an episodic noire adventure game. Amber is trying to find her missing brother with the aid of her trusty friend, Ted E. Bear. Haunted by nightmares, Amber wakes up in the middle of the night only to find out that her brother Flint is missing. She seeks help from her buddy, Ted E. Bear, a retired, grumpy old detective. The dynamic duo sets out to hunt for clues and interrogate witnesses and suspects, unaware of the tragedies that recently started happening to residents of Paper City. The plot thickens as a mysterious "Red Man" has been seen starting fires around town and looking for little miss Amber. Key Features Story driven "horror" noire adventure game. Hand-drawn 2D art and animation. Puns, puns and more puns! Sarcastic, dark and funny from start to finish. A variety of clues and puzzles to solve and uncover the mystery. Interactive and occasionally playable detective sidekick, Ted E. Bear. System Requirements Minimum OS version (earliest): Windows XP+, Mac OS X 10.7+ , Ubuntu 12.04+ CPU (GHz): Generally everything made since 2004 should work RAM (MB): 2000 Hard disk space (MB): 6000 Videocard: Generally everything made since 2004 should work DirectX® version: DX9 (shader model 2.0) capabilities Copyright 2018 Exordium Games