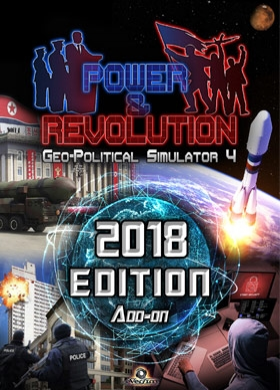 NOTE : Requires the base game Power & Revolution in order to play. About the game With the 2018 add-on, you can participate in the conquest of space and try to be the first to set foot on Martian soil, battle cybercrime and use it to cripple your enemies, administer justice to the roster of terrorists to thwart attacks and step in to prevent World War Three by overthrowing the American pres… ident and neutralizing North Korea. Key features Conquest of Space Blast off for the conquest of Mars, Venus, Saturn or any other planet or asteroid in the solar system. Create your own space agency if one doesn't exist, develop your space programs, build up a consortium of space agencies from various countries to increase your chances of success, expand your research areas to acquire new technology for space, build launch centers, train your astronauts, launch satellites or observation probes, construct telescopes and bases in space, discover new forms of extraterrestrial life and don't forget to watch competing space agencies because only the first one there will go down in history. The game includes its own contextual scenarios on the conquest of space: "First Steps on Mars" and "Groundbreaking Mission". Cybersecurity Protect your people and vital infrastructures from cyberattacks by criminal organizations or hostile countries. It's your turn: launch cyberattacks to destabilize a country and its head of state, influence electoral results or temporarily incapacitate an enemy army. Meanwhile, watch out for leaks and head off scandals. As head of the party, invest in cyberprotection to safeguard against outside intrusion. The fight against terrorism Monitor the roster of potential terrorists, launch a new investigation and in each case, decide on targeted arrests. You'll have to have nerves of steel because you can be blamed either for an attack where the perpetrator was known beforehand or if you arrest an innocent person. The game includes a new scenario on this theme: "Terrorist Threat Imminent". USA-North Korea Gobal Conflict After North Korea sends an unarmed intercontinental missile to the coast of the United States, tensions grow between the US and North Korean presidents. As the leader of the opposition party in the US, legally remove the current president, then eliminate the North Korean threat once and for all to prevent the start of a world war! New Features: Internet access: development of infrastructures for broadband, 4G, super high speed and mobile communication, which will impact the economy, service operations and the well-being of the population. Construction of highways and policy issues: the option to build new highways on maps current at the beginning of the game. The highways are appropriated by military units to mobilize faster. Managing the treasury: view the treasury reserve in the event of a budgetary surplus and pay off the national debt. This reserve is available for lending and is repaid by a rate of interest. The option to play as a gay or lesbian head of state. The option to change the name and flag of your own country whatever it may be The option to play over 100 years Various improvements : adjustment of historical part during election calculation, AI decision adjustments for starting a war depending of the context New Achievements New comparative maps: cyberattack sources, internet coverage and average speed in super high speed, 4G and broadband. Additions to the God’n’spy add-on: force the victory of a candidate in elections, the option of creating catastrophic cyberattacks on the map, display the file of a terrorist organization with the option of altering their stats, acceleration of space programs, addition of sexual identity to character sheets Additions to the Modding Tool add-on: the option to create and play any illegal organization in the world Data updated as of 01/01/2018 Maps of conflicts, current city battles and the status of opposing forces Military data: strength and armaments, most notably with the addition of missile launchers in Russia, China and North Korea, capable of launching intercontinental missiles. Terrorist organizations: strength, capabilities and resources Budgetary, Economic and Social Data… Political and geopolitical data: new governments, new parliaments, diplomatic relations between countries... New political figures in 2018 with new faces: new heads of state or government (Ireland, Austria, South Korea, Czech Republic, Romania, Iceland...), new ministers (USA, United Kingdom...),new German government, new party leaders (France, Italy, Spain, Germany, United Kingdom)... system requirements Windows - Minimum OS: Windows 10, 8, 7 Processor: 1.6 Ghz Memory: 4 GB RAM Graphics: 256MB DirectX 9.0-compatible video card Storage: 1 GB available space Windows - Recommended OS: Windows 10, 8, 7 Processor: 2 Ghz , multi-core processor Memory: 4 GB RAM Graphics: 3D Video card with 512 mb or more of dedicated VRAM Storage: 1 GB available space Coypright Eversim 2018, all rights reserved