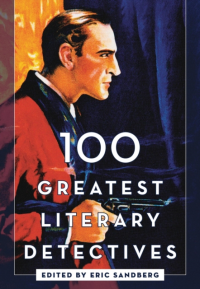 Crime fiction is one of the most popular literary genres and has been for more than a century. At the heart of almost all forms of mysteriesfrom the Golden Age puzzler to the contemporary police procedural, from American hardboiled fiction to the Japanese timetable mysteryis the investigator. Heor, increasingly, shecan be a private eye, a police officer, or a general busybody. But whatever forms t… hese investigators take, they are the key element of crime fiction. Criminals and their crimes come and go, while our attention is captured by these fascinating characters who exist at the intersection of so many different literary and social roles. 100 Greatest Literary Detectives offers a selection of the most influential, important, and intriguing fictional sleuthsamateur or professionalfrom around the world. From Sherlock Holmes to Harry Hole, Kinsey Millhone to Kiyoshi Mitarai, the detectives profiled here give readers a broader picture of one of fiction's most popular genres. Each entry summarizes the distinctive features of notable investigators and their approaches to crime, provides a brief outline of major features of their fictional careers, and makes a case for their importance based on literary-historical impact, novelty, uniqueness, aesthetic quality, or cultural resonance. The characters profiled here include Lew Archer, Martin Beck, Father Brown, Brother Cadfael, Adam Dalgliesh, Mike Hammer, Miss Jane Marple, Hercule Poirot, Ellery Queen, Ezekiel ';Easy' Rawlins, Kay Scarpetta, Sam Spade, Phillip Trent, V. I. Warshawski, Lord Peter Wimsey, Nero Wolfe, and many others. Readers will find some of their favorite detectives here, learn more about their literary and cultural significance, and discover other great sleuthsold and new, local and internationalin this engaging volume. 100 Greatest Literary Detectives provides a fascinating look into some of the most intriguing fictional characters of all time.